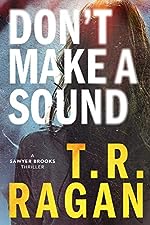 Plagued by traumatic childhood memories, crime reporter Sawyer Brooks still struggles to gain control of her rage, her paranoia, and her life. Now, after finally getting promoted at work, she is forced to return home and face her past.

River Rock is where she’d been abandoned by her two older sisters to suffer alone, and in silence, the unspeakable abuses of her family. It’s also where Sawyer’s best friend disappeared and two teenage girls were murdered. Three cold cases dead and buried with the rest of the town’s secrets.


When another girl is slain in a familiar grisly fashion, Sawyer is determined to put an end to the crimes. Pulled back into the horrors of her family history, Sawyer must reconcile with her estranged sisters, who both have shattering memories of their own. As Sawyer’s investigation leads to River Rock’s darkest corners, what will prove more dangerous—what she knows of the past or what she has yet to discover?

The description sounded like a book I'd enjoy, and as I started reading, it intrigued me. The multiple layer storyline worked well at first, but I figured out who Malice was and how it related to Sawyer's story too quickly. I found it a little weird that several characters were stereotypes of abuse victims. A lot of quotes from therapists as to how abuse victims should or would act as opposed to the characters' actions showing us the effects of abuse on victims. As the book approached its conclusion with crazier and wilder secrets emerging, it felt rushed and unbelievable. Things didn't play out naturally. Although the ideas were promising, I found the execution lacking. I still may give this author another shot.