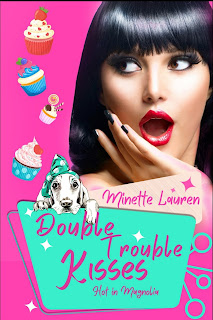 Description: As Seen On Amazon:

A Recipe for Double Trouble in Magnolia* One pair of sexy high heels.* Two identical women.* One handsome hero.* And a passel of mischievous pups.Tabitha Graham hasn’t played the switch-a-roo game with her identical twin, Taylor, since high school, but when her big sis “by one minute and thirty-two seconds” offers her a first-class ticket to Greece, Tabitha can’t say no.Tabitha’s teacher salary is nowhere near enough to splurge for a trip to the Aegean but if she can pull off pretending to be Taylor and interview the mayor of Magnolia, Tabitha will finally get a chance to see the ancient ruins of Delphi. Meanwhile, Taylor scoots off to NYC for the job interview of a lifetime.Eli Banks has a dream of his own — to open a healthy fast-food chain and make Magnolia a better place to live. When he rescues a TV reporter from a hit and run, he’s instantly smitten by the semi-famous beauty. He’s waited his whole life for this kind of connection, but for some reason, she keeps running hot and cold. Should he tell her how he feels or just move on before his heart becomes roadkill?

This installment in the Hot in Magnolia series had a mixture of hilarious and serious moments as the author reintroduced characters already known and added a few newcomers. The twin switch played out leaving broken hearts, threats of violence, and other obstacles for Eli and Tabitha to overcome in order to secure their romantic attachment. The whole town had to get over her deception as well. Rosie popped up with some trademark outrageous  scenes, and she's still one of my favorite characters. The daschsund with the wheely cart stole my heart. There are a lot of bedroom scenes with the stars of this episode living up to the HOT in Magnolia. I have read all the books thus far, and look forward to reading the next one. Minette Lauren is an author to follow!
AMAZON BUY LINK
Email ThisBlogThis!Share to TwitterShare to FacebookShare to Pinterest 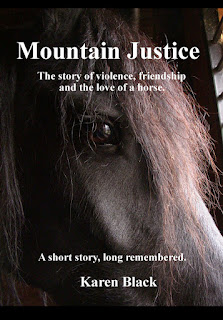 AS DESCRIBED ON AMAZON:
Annie, a woman who some would call an animal whisperer, has two close friends. One is a veterinarian and the other is a stallion. When her friends band together, in an effort to save her life, the law is cast aside, in favor of mountain justice. A story about friendship, violence and the love of a horse, this short story asks the question: how far would you go to save your friend’s life?

This tale proved much shorter than expected. It includes a preview to another book by this author. I enjoyed "Mountain Justice." The title describes the scenario. The horse was a character and played a role in the development of the story's finale. Friends, animal and human protecting each other, saving each other after following the law and due process to end up in the same circumstance. George's punishment satisfies the reader's desire for adequate consequences for his brutality. A lot of information packed into few pages. So, if you're interested in reading a quick shot from A to B, this will do the trick. It could have used some scenes between Annie and Rob to lay foundation for the level of his commitment to her safety.