"A Cowboy and His Neghbor" by Emmy Eugene Description As On Amazon:
Best friends and neighbors shouldn't share a kiss...Jenna Wright grew up next-door to Chestnut Ranch and the five Johnson brothers. Her older brother was best friends with Seth Johnson, and Jenna may or may not have had a crush on the handsome cowboy in her younger years.It was a long time ago, she tells herself.Now that she's divorced and back in town, she definitely has eyes for her best friend.Will he ever notice her?Jenna reasons that he's busy with his ranch and his dog rescue operation. They had an Edible Neighborhood project they were working until funding became a problem, and when Seth learns he's inherited over two billion dollars from his mother's half of a family cosmetic empire, he rushes to tell Jenna they can now fund the Edible Neighborhood. He wasn't supposed to kiss her. It was an accident, he tells himself. But Seth's own feelings roar to the surface, and he can't ignore them.Where did those come from?Can best friends and next-door neighbors Seth and Jenna navigate their rocky pasts to find a future happily-ever-after together?

A lot of things in this book didn't quite ring true to the characters. Why didn't Seth's mother spend some of their money to make her and her husband's lives a little easier? Why did the sons have to spread themselves even thinner trying to keep up with their yard work and house chores? The inheritance portion of the story was my least favorite angle. The two main characters could be interesting at times. The dog rescue was one of my favorite highlights since I am a big supporter of animal welfare. I enjoy a good story without sexual content, but the way these two fell for eachother seemed juvenile considering they were older and previously married. Although it passed the time, I can't say I'd strongly recommend it, and I don't think I'll read the next book. 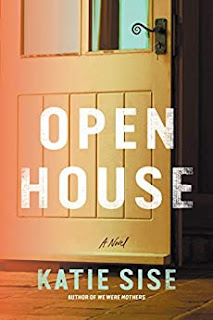 DESCRIPTION:
A decade ago in upstate New York, art student Emma McCullough walked into the woods and was never seen again. It’s a mystery that still haunts her bucolic university town and her broken family, especially her sister, Haley, whose need for closure has become an obsession. But now, finally, the first piece of evidence in the vanishing has been found: Emma’s bracelet, lodged in a frozen piece of earth at the bottom of a gorge. For Emma’s three best college friends, for a beloved former teacher, and for Haley, the chilling trinket is more than a clue in a resurrected cold case. It’s a trigger.
Then a woman is attacked during an open house, and the connections between the two crimes, ten winters apart, begin to surface. So do the secrets that run as deep and dark as the currents in this quiet river town.

It took several chapters to get into this book, but I'm glad I stuck with it. The base of it is good; once you brush off all the stuff thrown at you to distract and confuse. I felt overwhelmed by the number of turns the author took to get to the truth. I also found the final extra twist about the sister's disappearance a little hard to believe because the author hadn't sufficiently shaded the perpetrator in a way that made me accept their actions. I enjoyed the second half of the book better than the first. The jumping around in time was somewhat jarring, and the epilogue disappointed me some.
AMAZON BUY LINK

"The Next Wife" by Kaira Rouda 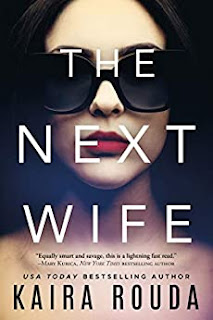 DESCRIPTION:
Kate Nelson had it all. A flourishing company founded with her husband, John; a happy marriage; and a daughter, Ashlyn. The picture-perfect family. Until John left for another woman. Tish is half his age. Ambitious. She’s cultivated a friendship with Ashlyn. Tish believes she’s won.
She’s wrong.
Tish Nelson has it all. Youth, influence, a life of luxury, and a new husband. But the truth is, there’s a lot of baggage. Namely, his first wife—and suspicions of his infidelity. After all, that’s how she got John. Maybe it’s time for a romantic getaway, far from his vindictive ex. If Kate plans on getting John back, Tish is one step ahead of her.
She thinks.
But what happens next is something neither Kate nor Tish saw coming. As best-laid plans come undone, there’s no telling what a woman will do in the name of love—and revenge.

There is a thin line between love and hate. Tish loves money, and if she can't hold on to the man that provides it, then watch out. An Older man with a mid-life crisis thinks he's found his soulmate in a woman young enough to be his daughter. Problem: He has a wife who doesn't understand him or appreciate him, and they fight all the time after building a company and raising a daughter together. Of course, the younger woman will win, right? But, it's not easy being the next wife. This book set me up to dislike characters, feel sorry for others, and think they are weak to discover that they are not weak but diabolical. I admit, I had figured out the secrets before the end of the book, but I liked how the author revealed them at the end. I enjoyed this story and will keep an eye out for other work by this author.
AMAZON BUY LINK
Email ThisBlogThis!Share to TwitterShare to FacebookShare to Pinterest

"Pure Trash: The Story" by Bette A. Stevens 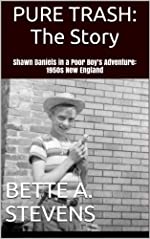 DESCRIPTION:
It's PURE TRASH (Historical Fiction/short story), a Compelling Prequel to the novel DOG BONE SOUP. The year is 1955. Remember the Good Old Days? You know, the 1950s and ‘60s, when America was flying high. The All American Family lived a life filled with hopes and dreams and life’s necessities too. Shawn Daniels isn’t your typical American Boomer Boy. No, Shawn is a poor boy. He can’t join Boy Scouts or sports teams. There’s not even enough money for necessities. Besides, Shawn doesn’t have time for that. But when chores are done, there’s always fishing!
In this short story, Shawn and Willie Daniels are off on a Saturday adventure in search of trash to turn into treasure. It is going to be a great day. Shawn is sure of it. No school and no bullies to remind him that he’s not one of the crowd. This is a story about bullies and what it’s like to be bullied (and not just by kids). It may redefine your definition of bullying. If you were a child who was thought of as “different” in some way, you know what bullying is about: torment, persecution, intimidation, to name a few of its synonyms. For Shawn and Willie, their difference was based upon the social status of a dysfunctional family and the alcoholism and abject poverty in which they grew up.

Shawn and Willie's brotherly connection entertained and warmed my heart. They found joy in simple things, and even though they were poor, they tried to keep a positive attitude. The way they were treated by adults broke my heart, especially when a church member who kindly smiled at them turned to hateful comments and behavior when they needed her help. I enjoyed reading this short story from a time before my time.
Email ThisBlogThis!Share to TwitterShare to FacebookShare to Pinterest
Newer Posts Older Posts Home
Subscribe to: Posts (Atom)