"All Our Dark Secrets" by Martyn Ford 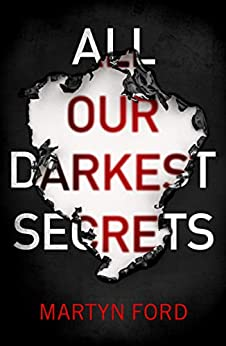 He’d do anything to protect his wife. But what if that meant making the biggest mistake of all?

James Casper is one of the good guys. A DEA agent. A loyal husband. With his sights set on the man at the top of the city’s opioid crisis, James is about to make the biggest bust of his career.

Then his beloved wife Rosie does something terrible, and James must choose: report it—or help her. He knows how this works, and he tells himself he’s smart enough to get away with murder. But James’s worst enemy knows what they have done—and he won’t hesitate to use it to manipulate him.

James is dragged into a dark and dangerous world. As events spiral and loyalties are tested, he realizes there’s only one way out. And that is to be even more ruthless than the people he’s working for.

Whatever happens, no matter how far he falls, at least he’ll still have Rosie.

I started this book and thought I wouldn't enjoy it. The clunky, convoluted beginning crashed into a horrifying moment at the end of the second chapter. By chapter six, I didn't want to put it down. Now, disbelief needs suspension to get through some of it, but it's a rollercoaster of misdeeds and poor luck ridden by some insane characters. I had to see how James could manipulate each more hideous situation to come out on top. Some of the violence is pretty graphic. I have to say, I had nagging feelings about James's wife from the beginning, and there was no effort to change my mind or make me doubt my original opinion as the story progressed. I was dead sure one of them would have to kill the other before the end of the book. Of all the things that happened, once the snag arose with James's partner nearing the finale, I could not feel the same way about the book anymore. No, he could have stopped that; he could have changed the outcome, but he didn't. The inconclusive last few pages left me feeling adrift on emotion. I need to know what happened. Fact. Final. What the heck did I just read? I didn't like the wishy-washy conclusion.

"Christmas in Newbury" by Regina Morris

DESCRIPTION AS ON AMAZON:
It is obvious to Melanie that James is uneasy around his daughter, isn't finding the town charming, and doesn't feel any Christmas spirit. She's plenty attracted to James, but will this city mouse really be interested in a country mouse? As James discovers lost family members, the warmth of a small community spirit, and the compassion from his daughter's nanny, he develops a stronger sense of family and his romantic feelings for Melanie grow.
He decides he must keep the factory running, and after buying Melanie's artwork at the local Christmas auction, she has renewed interest in her studies. The two search for the perfect Christmas gift for each other while trying to save the factory, which leads to a Christmas miracle.

James has everything he could wish for, but he doesn't know what to do with a baby - the product of a brief affair that ends up on his doorstep. Lucky for him, his father sends him to Newbury, where he hires Melanie as a nanny. He discovers his familial roots and warms to the town. The story is mild; there's not much tension or chemistry between the main characters. I think it could benefit from editing. A large portion of the story involves daily minutiae.  Although it's a predictable wealthy boss and poor employee romance, the tale's end provides resolutions. Melanie's connection with the baby was the sweetest part of the story.
AMAZON BUY LINK
Email ThisBlogThis!Share to TwitterShare to FacebookShare to Pinterest
Newer Posts Older Posts Home
Subscribe to: Posts (Atom)