"Kill the Messenger" by Tami Hoag 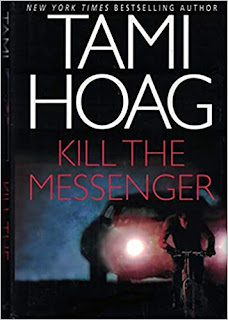 Jace's life is tough, but he keeps on trucking. He refuses to let the world keep him down because he's got a little brother that needs him. He shovels ice for a fish market first thing in the morning and then works as a bike messenger the rest of the day. One night, he's sent to deliver a package that lands him in the middle of blackmail and murder, and now he's holding the information that could cost him his life. This is an action-packed thrill ride. The characters are diverse. The mystery is twisted. Get ready for some surprises. Tami Hoag keeps you on your toes with this one!
AMAZON BUY LINK
This book was a Library loan.
Email ThisBlogThis!Share to TwitterShare to FacebookShare to Pinterest 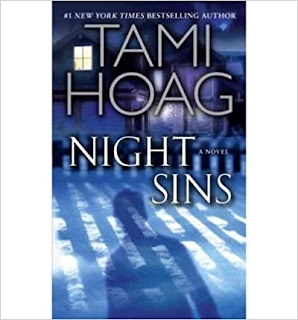 DESCRIPTION:
A peaceful Minnesota town, where crime is something that just doesn’t happen, is about to face its worst nightmare. A young boy disappears. There are no witnesses, no clues—only a note, cleverly taunting, casually cruel. Has a cold-blooded kidnapper struck? Or is this the reawakening of a long-quiet serial killer?

Nothing bad happens in Deer Lake... until it does. A child abduction. A marriage in trouble. The guilt. The fear. The secrets and deceptions. Smart, sharp detectives: one still struggling with his losses, and one with a chip on her shoulder fall in love amid the madness. The ending wasn't an ending because there is a sequel, and I can't wait to read it!
AMAZON BUY LINK
Email ThisBlogThis!Share to TwitterShare to FacebookShare to Pinterest 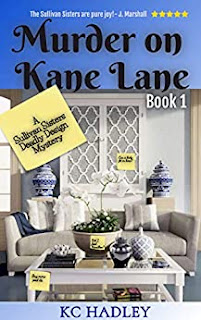 GET COZY WITH THE SULLIVAN SISTERS. A FRESH, NEW, CLEAN COZY MYSTERY

When a humiliating design reveal on HGTV becomes a viral sensation, Audra Sullivan moves back home to Las Sirenas Bay to start over. Everything is going as well as can be expected (she’s been reduced to cleaning grout) when the woman renting space in her design studio is found murdered.

That won't be good for business.

The first chapter started slow. It took a minute to get into the story. The citizens of Las Sirenas were unique and interesting, and the cast included an adorable surfing canine. There were a lot of cute plays on words.

The mystery aspect was muddled. The amateur sleuths did a lot of questioning and a lot of changing their minds about who the killer was. Theories based on unlimited rumors and hearsay without much evidence and not much actually happening after the murder. It felt like the sisters chased their tales interrogating and returning to question the same people every time someone pointed a finger elsewhere. The good news is that I did not figure out who the killer was until the end. But, there were no real clues throughout the book that would lead the reader to the conclusion. I was glad the sheriff redeemed himself at the end and proved the perception of his bumbling character incorrect. The book read quickly, an easy read, light entertainment. I would like to find out if Audra's gut feeling about her husband's death was accurate.

"Secrets To The Grave" by Tami Hoag 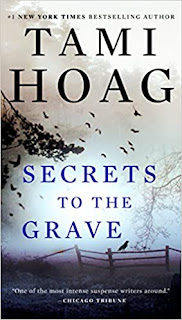 Secrets To The Grave included some characters from the first book of the Oak Knoll series. I liked those characters. However, in this installment, some of their actions made them a little less likable. I have enjoyed several of Ms. Hoag's books. This one was not my favorite. As far as a sequel to the first book- I would have rather read (and the reason I wanted to read the sequel was to find out) what happened to Tommy Crane and his mother. Did she know what Dr. Crane had done? Was she an accomplice? Would murder follow her to another town? Hoag answered none of those questions. Dennis Farman, the evil young character's story, continued; his path was foreshadowed and expected. Dr. Crane still sits in jail awaiting trial. We don't know if he'll ever face trial for the serial murders. These things would have been a better follow up book. Maybe the author intends to address this in the next addition? I hope.
The new elements of the novel, the murder of Marissa Fordham, and the Bordain family's involvement in her life were a bit lack-luster. I figured out who the villain was and their motives very early on - but that had to be an extremely disturbed party to commit such an act, and Oak Knoll has nuts abound. Poor Anne is not a cop, not a superhero, and yet, the woman wards off attacks by two different maniacs. That was tough to accept. The author usually does a great job with multiple plot lines and bad guys. I give the book three stars because I enjoy the author's style. Straight forward and concise. And because I felt compelled to finish it even though I suspected the ending. I plan to read the next book in the series.
AMAZON BUY LINK
Email ThisBlogThis!Share to TwitterShare to FacebookShare to Pinterest
Newer Posts Older Posts Home
Subscribe to: Posts (Atom)