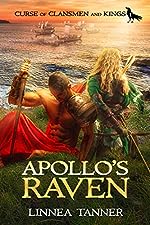 AWARD-WINNING APOLLO'S RAVEN sweeps you into an epic Celtic tale of forbidden love, mythological adventure, and political intrigue in Ancient Rome and Britannia. In 24 AD British kings hand-picked by Rome to rule are fighting each other for power. King Amren's former queen, a powerful Druid, has cast a curse that Blood Wolf and the Raven will rise and destroy him. The king's daughter, Catrin, learns to her dismay that she is the Raven and her banished half-brother is Blood Wolf. Trained as a warrior, Catrin must find a way to break the curse, but she is torn between her forbidden love for her father's enemy, Marcellus, and loyalty to her people. She must summon the magic of the Ancient Druids to alter the dark prophecy that threatens the fates of everyone in her kingdom.

Will Catrin overcome and eradicate the ancient curse. Will she be able to embrace her forbidden love for Marcellus? Will she cease the war between Blood Wolf and King Amren and save her kingdom?

I started reading this book and thoroughly enjoyed the evolving curse, the evil banished brother trying to overthrow his father, and Catrin's forbidden love for Marcellus. It consisted of more politics and war than the star-crossed lovers' budding romance, in my opinion, which confused me at times, and there were many gruesome scenes I could not fully read, but others may not be put off by the things that make me squeamish. Something that bothered me was Rhiannon's treatment of Catrin and that she chose to take Agrona's side (whom she proclaimed she didn't trust) against her daughter. The way Catrin connected with the raven fascinated me. I grew invested in Catrin's and Marcellus's fate and wanted to find out if they'd remain true and stop constantly doubting each other. Their actions at the end of the book answered my question, and I'd like to read the sequel to see if their relationship becomes more steadfast and sure and discover what happens with Marrock. I feel Catrin will have to face him eventually.