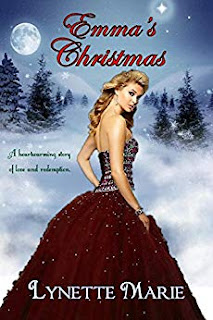 This Christmas, past will meet present in the clash of wills of one estranged couple.

Dr. Jonathan Kirkpatrick, following the demands of his conscious, set out to join the Confederate forces in the War Between the States, leaving his childhood sweetheart behind.

Emma could not forgive his betrayal, and so in an act of defiance she chose to wed another.

As the years passed, each would travel down separate avenues in the pursuit of completion, only to find the way blocked by tragedy, until that fateful day when their paths would cross once again at an extended Christmas party.

The final ending to their love story would be orchestrated during this gathering, but will it leave them with a happily ever after?

'Emma's Christmas: A heartwarming story of love and redemption' brought a range of emotions, but the title sums it up. A holiday tale, it warmed my heart that two childhood friends turned sweethearts separated by war received a chance to rectify their relationship. Emma's poor and impetuous choices brought much pain and heartache to this couple. With help from family and fate, they are allowed to come together and decide if they can heal their friendship. I liked the historical setting and descriptions. Characters held my attention, and I believed in them. The author did a good job hinting at intimacy without graphic details. The plot and pace pleased me, and I thoroughly enjoyed Lynette Marie's story.