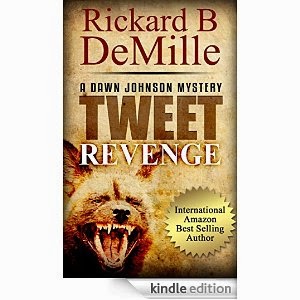 I was given a free copy of this book in exchange for an honest review and I recommend it.

"Tweet Revenge" by Rickard B Demille is a suspenseful mystery with a woman sleuth. FBI agent Dawn Johnson has her first real case after recovering from near fatal gun shot wounds. She received them when she interrupted a robbery in progress during a celebratory beer run only hours after graduating from the academy. She studied medicine and law, but has changed the focus of her career. She wants, no, she needs to be an agent so she can secretly investigate the disappearance of her father. Her boss doesn't seem to want her around and consistently recommends she go back to Quantico where her skills can be best put to use. Dawn holds her own in this race to catch a serial killer who uses twitter to announce his activities and taunt the police. She has to stand strong amongst the lead detective Guzman, a Texas sheriff, Bubba Scates who's personality doesn't exactly shine, and her own boss who wants to find any reason at all to pull her off the case. Justice is handing out retribution for some horrible crimes that the offenders walked away from, and is able to stay one step ahead of the police... and Dawn has to wonder why that is. She is a smart, strong, and capable woman, but can she puzzle this one out before it's too late?

I enjoyed this story very much because the characters are well developed and believable (I especially liked Bubba Scates - a complex man), the plot moved smoothly, and because it was just a darn interesting mystery. The balance between police investigation and action made it an easy read. The chapters from Justice's point of view were chilling.The ending meshed, and it was well planned out to leave room for sequels that I am sure will be as captivating as this book was.

In all fair disclosure, I did mention to the author another round of editing could be used.