"The House Guest" by Mark Edwards 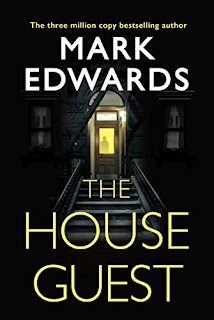 When British twenty-somethings Ruth and Adam are offered the chance to spend the summer housesitting in New York, they can’t say no. Young, in love and on the cusp of professional success, they feel as if luck is finally on their side.

So the moment that Eden turns up on the doorstep, drenched from a summer storm, it seems only right to share a bit of that good fortune. Beautiful and charismatic, Eden claims to be a friend of the homeowners, who told her she could stay whenever she was in New York.

They know you’re not supposed to talk to strangers—let alone invite them into your home—but after all, Eden’s only a stranger until they get to know her.

As suspicions creep in that Eden may not be who she claims to be, they begin to wonder if they’ve made a terrible mistake…

This novel begins and the premise hooks me. Genuinely creepy, don't let a stranger inside... but she stands in the rain with nowhere to go and knows details about the homeowners. A harmless, damsel in distress, right? As the story progressed, I didn't like Adam much. That could be okay if it leads to something bigger, and more important. But, he kind of lurked between being jealous of his girlfriend's success while he failed and displaying pride in her achievements. Eden's weird obsession with Ruth should have been clear while she watched Ruth's film. To me, it seemed Adam intruded on Eden while watching her lover's role in a movie, disturbing. Things spun out of control for me. The bearded man searching for his daughter's abductors real story turned too much for me and continued into a crazy ending. I recommend the author, but it's not my favorite Mark Edwards book.
Amazon Link