"The Haunting of Brynn Wilder" by Wendy Webb 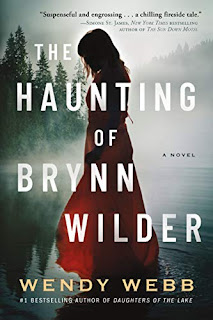 After a devastating loss, Brynn Wilder escapes to Wharton, a tourist town on Lake Superior, to reset. Checking into a quaint boardinghouse for the summer, she hopes to put her life into perspective. In her fellow lodgers, she finds a friendly company of strangers: the frail Alice, cared for by a married couple with a heartbreaking story of their own; LuAnn, the eccentric and lovable owner of the inn; and Dominic, an unsettlingly handsome man inked from head to toe in mesmerizing tattoos.

But in this inviting refuge, where a century of souls has passed, a mystery begins to swirl. Alice knows things about Brynn, about all of them, that she shouldn’t. Bad dreams and night whispers lure Brynn to a shuttered room at the end of the hall, a room still heavy with a recent death. And now she’s become irresistibly drawn to Dominic—even in the shadow of rumors that wherever he goes, suspicious death follows.

In this chilling season of love, transformation, and fear, something is calling for Brynn. To settle her past, she may have no choice but to answer.

After reading it, I don't know what I initially expected from this book. I downloaded it as a free read many months ago and finally got to it recently. It turned out Brynn was haunted, or rather, her vacation place was haunted. The setting is lovely; the author did a good job making me believe I was there. There were some quirky characters. It left a lot of questions. The local authority's suspicion of Dominic never came to fruition. Many questions about Dominic were left hazy. Why did he save Alice if she was doomed to die anyway? Why Did he dive into the water that final fateful time? The ending filled in some details about Brynn and Jane Doe found dead in the beginning. That was the fascinating element of the book. When I finished and thought about it, I got a nice feeling. I want to believe in life after death, love that transcends time and space, and a commitment that lasts for eternity.