"Cupcakes and Kisses" (Hot in Magnolia Book 1) by Minette Lauren 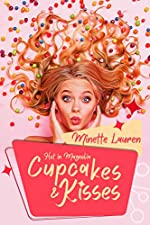 What does it take to make it Hot in Magnolia?

* One cup of sexy

* And a whole lot of heart

Magnolia, Texas, might be booming with single men, but as far as Melvina Banks is concerned, it’s a bust. Between her volunteer work with the Magnolia Blossoms, tutoring at the local library, whipping up cupcakes for the local firefighters, and working at her dad’s diner, she has no time for blind dates let alone finding “the one”. Melvina would much rather spend her precious downtime fine-tuning her plan to open a bakery. When celebrity chef, Riley Nash comes to town for a Blossoms fundraiser, Melvina hopes for a chance to pick Riley’s business-savvy brain. With Riley’s nationally acclaimed talents and his successful new restaurant, Braised, he just might be the one who can help Melvina whip her blossoming idea into a recipe for success. Trouble is, she can’t seem to keep her mind on business when it comes to Riley’s devilish good looks and sizzling charm. The heat is turned up when Magnolia’s handsome fire chief, Manny Owens, sparks an interest in Melvina. Torn between two of Magnolia’s hottest bachelors, she can’t help but feel the burn. Can Melvina separate her rising affections for both men, or will she end up with egg on her face?

Cupcakes and Kisses is the first book in the delicious new romantic comedy series, Hot in Magnolia, by award-winning author Minette Lauren. Set in the burgeoning town of Magnolia, Texas, this hot new series is brimming with laugh-out-loud moments and chock-full of endearing characters who will have you rooting for love and cheering for happy endings.

CUPCAKES AND KISSES charmed me. It was both comical and sometimes serious. Melvina's search for love had me rooting for her happiness. She had the attention of two good men; she had to choose one of them and remain true to her dreams. I liked that Melvina was a mature character that knew what she wanted and had real-life issues she'd dealt with such as maintaining a huge weight loss. Her best friend and her Pez dispenser were a little iffy. The Magnolia Blossom president was someone you could love to hate. Riley and Manny were each dreamy in their own way - a bonus. The happily-ever-after was sigh-worthy. I will definitely read more books by Minette Lauren.