"Never Look Back" by Mary Burton 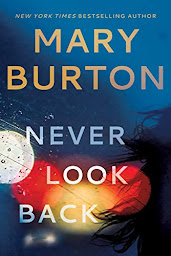 Melina had a tough childhood, no doubt, but should she be grateful to the woman who dumped her on the side of the road? After all, she could have been tied into those circumstances with the drifter criminal forever, but instead she landed in a loving home with doting parents. It all lends credibility to her career in law enforcement following in her adopted father's footsteps.

While helping her friend who runs a mission locate missing prostitutes she stumbles upon a serial killer and narrowly escapes his clutches. This introduces Jerrod, an FBI agent who has hunted this killer for many years.

When another little girl who resembles Melina gets left in a car wreck, it pries open Melina's past and reveals some genetic truths that are horrifying. It also leads to a second serial killer.

I liked this book. The only problem was that the story about the first serial killer was dropped for so long while they moved on to the second one that I found it jolting returning to the first killer.

Overall, it was a satisfying thriller with multiple storylines and connections between the key characters. The romantic angle was a bit muted, but I was glad the two found comfort in each other when they had so much darkness in their lives. I prefer the suspense and thriller over the romance genre, so it didn't make much of a difference to me. I found myself exclaiming out loud a few times near the end. Definitely worth a read.