"In Her Shadow" by Mark Edwards 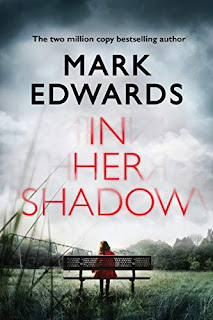 Mark Edwards has become one of my new favorites. I find myself looking for another of his books to add to my TBR as soon as I finish one. "In Her Shadow" didn't disappoint. Jessica's sister's death - long-ago ruled an accident- suddenly crept back into the forefront of her mind because her young daughter claimed her dead auntie spoke to her. Was it the girl's imagination? Had Isabel actually returned to tell them something about her death- it wasn't an accident? Strange happenings around the house convinced Jessica's mother, Mo they were susceptible to the paranormal, and Isabel's death must have been murder. After all, they'd been haunted before when Jessica and Isabel were children. Mo stubbornly thought Isabel's husband, Darpak must have killed her because Darpak and Isabel kept secrets in their marriage. It turned out that a lot of people kept secrets, some bigger than Olivia's secret relationship with Isabel's ghost.
This story boasted extremely well-written characters, especially Olivia, Jessica's four-year-old daughter with a knack for predicting the future and handling the return of her aunt that she'd never met.
A line of suspects paraded within Jessica's suspicions, but the author never committed to Isabel's death being a murder. I had to ride the tidal wave until he revealed all the secrets in the perfect timing to figure out what had happened to Isabel, and if she'd truly come back to her loved ones. I strongly recommend this book!