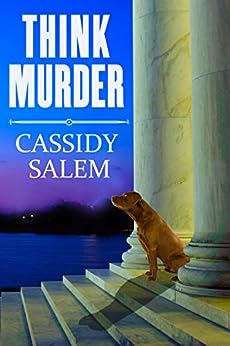 Good friends, wine and conversation… Great fun – until somebody turns up dead.
Adina Donati came to Washington D.C. to find excitement, not a dead body. When a friend is murdered, Adina is drawn into the middle of the police investigation. Tensions rise as the suspect list expands to include Adina, her friends, and colleagues at the prestigious think tank where she works. But every cloud has a silver lining. Between the nice detective, the hot new volunteer at the dog rescue center, and the newly available preppy ex-boyfriend, Adina’s dating dry spell appears near its end. That is, if she doesn’t become the next victim.

I read this book rather quickly. I don't regularly read mysteries of the cozy variety. Although all the points of a thrilling story were present, I couldn't help but feel a little disappointed when I'd finished it. Wait, That's it? I suppose the even keel of emotions throughout the book may be typical for the genre? Adina didn't seem quite upset enough over finding her murdered best friend. It appeared her lukewarm romantic interest in two different men mitigated her distress pretty quickly. When she uncovered political secrets that could have triggered the killing, I thought, 'here we go; this is an interesting angle,' but again, even with attempted kidnapping, the tension didn't seem to rise. The drama appears at the office amongst coworkers and the jealousy between volunteers at the animal shelter. Alternate suspects were hinted at with little to no reason behind the suggestions - and those spins didn't take root, they could have been played out to the benefit of the mystery. So many times, I thought scenes were building to an event, 'maybe this will happen,' I thought, 'or maybe that,' but really, nothing happened. Even though Adina uncovered the clues that led to the case being solved, once those details were known, the investigator figured it all out and then just dumped the info into Adina's - and the reader's - lap. Boom; done. All we're left with going into the next book is wondering which man Adina will choose. If you enjoy a book with a realistic setting and clean romance that entails murder, kidnapping, and political intrigue but reads quickly and easily without making your emotions reel and doesn't keep you awake at night, perhaps you'll enjoy this book.