"A Familiar Sight" by Brianna Labuskes 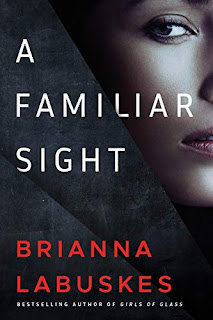 Psychologist and criminologist Dr. Gretchen White is a specialist in antisocial personality disorders and violent crimes. She’s helped solve enough prominent cases for detective Patrick Shaughnessy that her own history is often overlooked: Gretchen is an admitted sociopath once suspected of killing her aunt. Shaughnessy still thinks Gretchen got away with murder. It’s not going to happen again.

When a high-profile new case lands on Shaughnessy’s desk, it seems open and shut. Remorseless teenager Viola Kent is accused of killing her mother. Amid stories of childhood horrors and Viola’s cruel manipulations, the bad seed has already been found guilty by a rapt public. But Gretchen might be seeing something in Viola no one else does: herself.

If Viola is a scapegoat, then who really did it? And what are they hiding? To find the truth, Gretchen must enter a void that is not only dark and cold-blooded, but also frighteningly familiar.

I was stuck between 3 and four stars for this book. The characters' real stories, once revealed, shocked, amazed, and horrified me. The way the author chose to uncover the secrets proved distracting and meandering. The timeline jumped around instead of being straight forward. Dr. Gretchen White annoyed most of the time, and hinted that we should feel sorry for her because she'd been falsely accused of murder as a child, but then she'd never admit that to be fact. She rambled on too many occasions defining the characteristics of empaths, sociopaths, and psycopaths and where they fall on spectrums of behaviors. We get it already. Explaining she would or wouldn't say or do something as pertaining to her diagnosis as a sociopath became tedious. Tess, Reed, Claire, and Ainsley's story grew clouded by this, and their tale was what kept me reading the book. It could have been cut way down, eliminating all these narratives explaining thoughts and behaviors and been a much better, shorter, more engaging and harder to put down novel.