"Girls of Brackenhill" by Kate Moretti 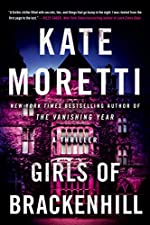 When Hannah goes back to Brackenhill because her aunt passes away, a long tale unwinds about her childhood, why she spent summers with her aunt and uncle, and the things that occurred while she lived in the castle. Parts of this book were consuming. I kept reading and gathering little facts thinking that eventually, it would all fall into place, and everything would make sense. That didn't happen, though. The beginning scene sent shivers up my spine, but by the time I'd reached the end, I'd forgotten the significance of that prologue. I didn't piece together who the unnamed parties of the murder were, and I didn't even care to go back and reread it to figure it out. There were things focused on I was sure would mean something later in the story that never amounted to much. Why did Hannah repeatedly stress the creepiness and malevolence of Reggie? To make him a suspect in later events? But he was never a suspect or fleshed out as a suspect. Just a jerk, a teenager who got another teenager pregnant? Why make a big deal about the girl being pregnant when she dies? Why didn't Fae question Hannah's statement that Julia was with a girl that had disappeared over a year ago if Fae had first-hand knowledge about what happened to her? Why did Hannah and Julia, sisters, not know they were both chasing the same boy all summer? As an engaged adult, why did Hannah fall into bed with Wyatt? As a teenager, he'd slept with Hannah and then kissed her sister, denied they had any relationship, and humiliated her in front of the town, making her look unhinged? If she were unhinged, it would have been terrific. But she had carried on an intimate relationship with this guy for more than one summer, and nobody knew about it. He refused to acknowledge the truth. Not a case of the old castle driving her insane, such as the whole plot suggested. Crazy Aunt Fae, a witch? Did the property drive her insane? No, grief over the loss of a daughter perhaps made her do something evil. I'm not sure if she did or she didn't. That act was suggested, hinted at, but not substantiated. And the biggest let down of all: What happened to Julia? If you had committed an act as heinous as Hannah thinks she uncovers a memory of doing in the last pages of the book and just put it out of your mind for seventeen years- yes, you'd have to be insane. But there was no closure in that either. Nobody believed what she confessed. No resolutions, no truth, no proof.
AMAZON BUY LINK
Email ThisBlogThis!Share to TwitterShare to FacebookShare to Pinterest
Newer Post Older Post Home