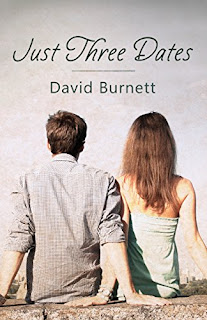 Since Karen broke up with her last boyfriend three years ago, she has not dated the same guy twice, and only one man in ten has received so much as a goodnight kiss as she turned him away.

Mark still dreams of his almost-fiancée, and his date book has been empty since he threw her out a week before he’d planned to ask for her hand.

Karen’s mother tells her she needs a husband. Mark’s mother says he needs a wife. But left on their own, these opposites will never attract. As a result, their mothers become matchmakers. They entangle their children in a series of blind dates, suggesting that, in the absence of love, a marriage of convenience is a live option. ... But is it?

I was lured in by the description and completely enjoyed the beginning of this book; the meddlesome but endearing mothers convincing their children to agree to three dates in hopes they'd fall in love or at least marry for convenience sake. The urgency to wed didn't make sense when Mark and Karen were both rather young. Mark was hung up on his ex-girlfriend for most of the story, and that made it a little awkward for me; especially when the truth about their break up was revealed. Some scenes seemed far fetched; Karen falls down a mountain, gets badly-injured and can hardly move but goes dancing for hours immediately afterward; but the setting and descriptions drew a beautiful picture in my mind, and I was happy with the ending.